This guest post comes from Rebecca Dekker, PhD, RN, APRN, of Evidence Based Birth. Rebecca is a researcher and a nursing professor who formerly served as a member of the executive board of ImprovingBirth. You can follow Rebecca on her Facebook page and on Twitter.

Note: This article and the accompanying graphic were updated in February 2018.

On Labor Day 2012, I created this table to mark the “state of maternity care” in the United States. As we draw close to the end of 2012, I have updated this table and re-posted it here on ImprovingBirth.org. The new table can be shared as an image or as a PDF here—and please feel free to share, pin, tweet, email, and print! The references are available both here at ImprovingBirth.org and Evidence Based Birth (click here).

I was actually sick this past Labor Day. I was lying in bed as I worked on the article that included the original version of this table. As I compiled the evidence about the state of our maternity care system, I kept thinking to myself: “These numbers are insane. Something has got to change.”

Interestingly enough, at the very moment I was composing this table on Labor Day, nearly 10,000 women were rallying across the nation for evidence-based maternity care. Women all across the U.S. stood up together with each other and with their families and said—to our healthcare system, to our providers, and to each other—“You know what? We can do better. We deserve respectful, evidence-based maternity care.”

In my opinion, women hold more power than they think. As women rally together on the streets—in greater numbers each year—and say, “We can do better,” then I believe it will happen. We will see an improvement in birth.

In fact, the main reason I have become involved in ImprovingBirth.org is so that someday, my daughter won’t have to fight for evidence-based care— for her, it will be a given.

This work is my gift to her. 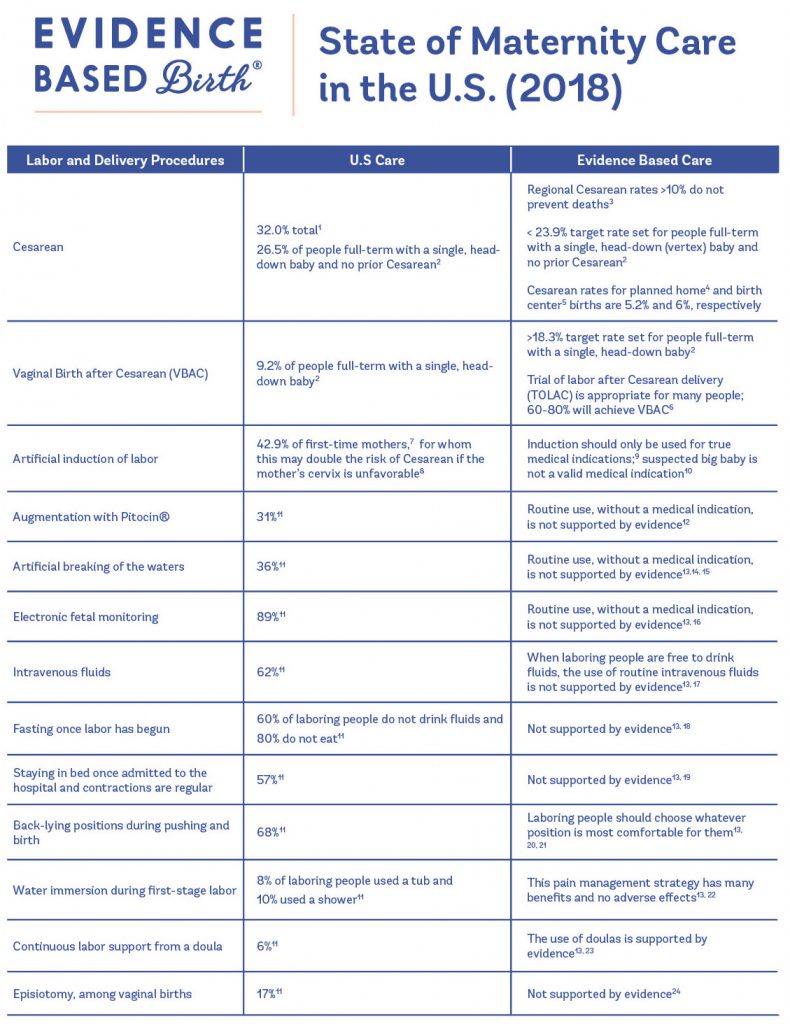 * Please note: Continuous updates to table and references are made as necessary. This article and the accompanying graphic were updated in February 2018.