Cut the Catty: Why We're All Losing the Mommy Wars*

All my life, I’ve noticed a tendency among women to condemn each other rather than to reach out, and to criticize rather than support.  There’s this territorialism that very effectively divides us.  It exists among women as a whole (“Did she really wear that?  She’s not 21 anymore.”), among women as mothers (“I can’t believe she didn’t even try to breastfeed!  How selfish.”), and among groups of women who can’t work with other groups of women (“Remember when they didn’t invite us to that thing they had?  Never again.”).

I’ve been that girl.  I’ve been the mean girl.  Not always, but sometimes.  I never knew why; I just did what I learned and what felt like it came naturally.

We Call it “Cattiness.”

That’s a cute word for an ugly thing.  Cattiness is much deeper and much more powerful than it sounds.

The ones who are different from us. 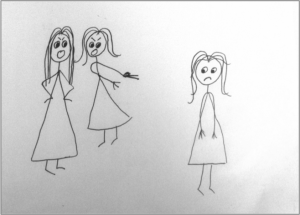 (Don’t be jealous of my amazing original artwork.)

If you thought high school was bad, welcome to motherhood.  The so-called Mommy Wars take this competition to a whole new level.

Let’s call it what it really is…

It’s not cute.  It’s not just “what women do.”  It’s a learned behavior and mindset, and it’s used by people who need to feel strong by making others feel weaker.

Horizontal violence, simply put, is bullying among peers within an “oppressed” group of a hierarchy.

If you Google it, you’ll find that it’s not easy to find a definition of this broad term that isn’t focused on nursing.  In fact, the entire first page of Google hits are about nursing and one reference to midwifery, two overwhelmingly female fields with histories of your classic setup: lots of responsibility, less appreciation than deserved, and domination by another level of authority.**

In other words, a microcosm of women.

And if you don’t think women as a whole are an oppressed group, consider that we were property in most places for the majority of history, our work has not been as valued as men’s, we weren’t allowed to vote until less than 100 years ago, and we haven’t ever represented ourselves in government nearly as much as we participate in American life.

Those inequalities don’t resolve themselves in a few generations.

So, here we are, still stabbing at each other blindly, largely unaware of how we are hurting ourselves by doing so.

What does this have to do with Improving Birth?

Birth is a human rights issue, but it’s driven by women – women who carry, protect, and give birth to the babies who make up the human race, and women who have an incredible, mostly untapped ability to change maternity care in the U.S. and around the world.

But, in some ways, we can’t get it together.  This group doesn’t agree with that group on tactics, this person was rude to that person and now they don’t speak, these people don’t trust each other because of their history, etc., etc., etc.

Horizontal violence is a really effective way to ensure we as individuals will remain weak and the group as a whole will always be weak.  It’s just a way we push our own weakness onto the people who might otherwise stand with us in collective strength.

Until we get it together, we’re going to be fighting awfully hard in our own little corners.  It’s going to be a never-ending series of tough, long battles with no end to the war in sight.

Because, I’ve got news for you, ladies: we are being encroached upon on all fronts.  In states across the country, and countries across the world, our options and rights are being limited more and more.  Other people are making decisions about how, where, and with whom we give birth.  If you don’t think that’s true, tell me if your insurance policy covers — if your state allows — if your hospital fully supports — your choices in birth.  And if you are respected as the ultimate decision-maker in childbirth.

Sisterhood is how we win.

We’ve got to come together.  We’ve got to get over petty squabbles – and not-so-petty squabbles – and find the common ground where we can stand together.   We have to remember that we don’t have to agree with each other to support each other.  There is no reason that we can’t work together on our common ground – even if we completely disagree on hot topics like abortion, religion, and politics.

How do we get there?

Here are some thoughts on how we do that.  I’d love to hear your ideas, as well.

1.     Identify horizontal violence.  Stop calling it cattiness.  Call it what it is and pause right there.

3.     Don’t make assumptions.  If I had a nickel for every time I thought I knew what someone was “implying,” only to find out I was way, way off base…  I’d have a pretty big jar of coins to remind me how stupid it is to make assumptions about anyone else’s motives, feelings, and circumstances.

4.     If you’re in a group, you can formalize your commitment.  We have something we use for anybody signing on to the ImprovingBirth.org leadership team.  It outlines exactly why we don’t do the “catty” thing and how we avoid it.  We also specify “respect and inclusivity” in our Organizational Principles.

5.     With other groups, “find your overlap” and formalize it.  Where do you agree?  Go there and stay there.   You can even write it down.  Public partnerships with each other is a great way to set the example that we can cross borders to all work together.

6.     Eyes on the prize.  Do you want to spend precious minutes of your life denigrating others, or moving the ball forward?  You have limited time.

What do you think?  What has worked for you?  Comment below!  (And note our Our Comments Policy, please — we don’t have time for cattiness, ha! )

The Rally to Improve Birth is a Step Towards Unity

When we gather this Labor Day, Monday, September 2, 2013, we are making a big statement.  We’re asking that we all unite around some pretty basic concepts – evidence-based care and humanity in childbirth – to show the world just how many people feel passionate enough about better birth for moms and babies.

The rallies will include people from all walks of life, perspectives, and political ideologies from over 160 cities in all 50 states, plus Australia, Canada, and Japan.  They will include people who are passionate about specific issues in childbirth – some stances in conflict with each other – who have “found their overlap” and are holding hands in that overlap.

This is how we “win.”  Sisterhood for those of us who fit that category, and unity for all of us who want to make birth better.

We really hope you will join us, too.

* The original title of this article was “‘Catty B****es’ & Why We’re All Losing the Mommy Wars.”

Also by Cristen: “Selfish Women and Their Silly Birth Experiences” and “A Healthy Baby Isn’t All That Matters“