Yesterday, I gave a talk called “Obstetric Tradition vs. The Modern Woman” to a university class.  I described to these college students how differently I was treated as a person in regular life and as a pregnant woman in her health care.

During pregnancy, the messages I received over and over again from my healthcare providers and people in general boiled down to a couple of things: this is too scary for you to really want to know about, and this is too important for you to participate.

One well-meaning doctor said that very clearly when I asked exactly how I should be preparing for birth.  “You just come in when it’s time, and we’ll take care of everything.”

We talk all the time about evidence and rights and all of the complicated issues that go into the way healthcare – particularly maternity care – is delivered, but, to a birthing woman, that all just goes into one big pot of, “Why is this so scary and confusing?  Why is it being taken out of my hands?  Should it be taken out of my hands?”

For a woman who isn’t willing to settle for “We’ve already done all of the thinking for you, so just relax and follow the rules” (thank you, Emily Oster, for spelling that out) traditional maternity care doesn’t work.  The “don’t worry your pretty little head about it” attitude runs smack up against the relatively new idea that the pretty little heads of women are good for more than just smiling and nodding.

In fact, that’s part of why I was standing in front of a room mostly full of females.  We have already agreed that women get to use their brains now.  But what about the rest of themselves?

Our bodies are made for more than just decoration, too.  We will give birth, one way or another, regardless of the care we receive.  Babies are born, pretty inevitably.  Science is with us on this one.

How different are these two images?  How much the same?  The students used words like “prisoner” and “machine” for the first, and “inhumane” for the second. 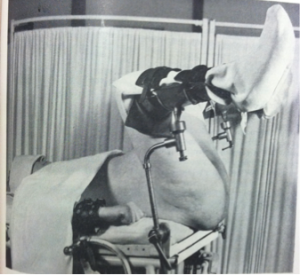 Maternity care is one final frontier for the modern woman where we’re articulating, yet again, that we don’t need anyone to save us from ourselves – from our bodies, from our brains, from our biology.  We don’t need management.  What we need is information and support to do the thing we’ve been doing for millennia, for better or for worse.

I felt a little sad and a lot hopeful talking to a class where a little under half of the 50 or so students in the room said they thought that doctors have legal rights over the body of a pregnant woman.  If the generation coming up now manages to see through the outdated attitude that women aren’t capable of participating in their own bodies, they’ve got a pretty good chance of having it better than we do now.

Want to support ImprovingBirth.org’s mission? Like us on Facebook, participate in our history-making 2013 Rally to Improve Birth, and donate to the cause.