We are pleased to report that the Commission for the Accreditation of Birth Centers (CABC) has recently updated their policy on Trial of Labor After Cesarean (TOLAC).  The new policy makes vaginal birth at accredited birth centers a possibility for more women – but its impact on the national conversation is more powerful than even that.

Effective immediately, the birth centers accredited by the CABC may offer TOLAC* to all women who have had one previous cesarean, a low, transverse scar, and favorable placental location (not low-lying or over an old scar).  Previous policy made it an option only for women who had already had at least one vaginal birth after Cesarean, and only at facilities that could demonstrate 24/7 obstetric and anesthesia care available in close proximity, as per the recommendations of the American College of Obstetricians and Gynecologists (ACOG).

Nine in ten women who have Cesareans go on to have all future babies by Cesarean.  As too many women know, access to vaginal birth after Cesarean (VBAC)* is extremely limited in many areas around the country, with almost half of U.S. hospitals maintaining mandatory surgery policies for women who have had a Cesarean.  These liability-based policies contrast with medical evidence and guidelines put forth in 2010 by the National Institutes of Health (Vaginal Birth After Cesarean: New Insights) and American College of Obstetricians and Gynecologists (Practice Bulletin #115) that support increased access to VBAC.

Recently, a mom told us that in her quest for a vaginal birth after Cesarean, one obstetrician she spoke to said “their hands were tied and that they couldn’t recommend the obviously safest option, based on peer-reviewed studies, because lawyers and other hospital policy-writers determined what would be covered by malpractice insurance. If baby or I died or were injured from cesarean, they were completely covered. If we were injured or died during a VBA2C, they were completely on their own. So the safest medical option for me was NOT the safest financial/business option for them.”

“Safety” – usually the central debate regarding VBAC – is a relative term, of course.  Neither vaginal birth after Cesarean nor repeat Cesarean is risk-free, and neither is inherently “safe” or dangerous.  It’s a very preference-sensitive decision – one that only women themselves can make, weighing which set of risks and potential benefits they are willing to accept, and what is best for them and their families.

As personal as that decision may be, it’s one many women never get the opportunity to make, because informed consent and autonomy are not even in the national conversation about VBAC.

While medical evidence and national guidelines make it clear that VBAC should be offered routinely as a matter of public health, CABC president Susan Stapleton, DNP, CNM, FACNM told us that the change to CABC policy “reflects a commitment to informed consent as a central tenet of maternity care.”  The new policy hinges on a comprehensive written and verbal educational process that includes ongoing discussion.  Built into that process is the assumption of risk for clients.

This is so very important because one of the fundamental dysfunctions in maternity care is that, legally, both responsibility and rights are often held by the care provider, rather than the care receiver.  Discussions about liability often center on this idea; that providers can be sued for anything that goes wrong, whether or not it was their decision, or whether or not it was something that was actually in their control.  This idea conflicts directly with the idea that women are active participants and decision-makers in their care, and can result in violations of their rights to that. (See Informed Consent: Making Rights into Reality by Hermine Hayes-Klein.)

A recognition that women and families are full owners of that responsibility and right is something that American maternity care needs more of.

Per Dr. Stapleton, the CABC holds evidence-based care and informed consent as core principles in the birth center model of care, and access to TOLAC is both evidence based and a matter of informed consent.   Specifically, the definitive 2010 consensus statement from the National Institutes of Health said, “This report adds stronger evidence that VBAC is a reasonable and safe choice for the majority of women with prior cesarean. Moreover, there is emerging evidence of serious harms relating to multiple cesareans.”  The NIH statement was also clear that there is a low-level of evidence for the strong language used by ACOG on 24/7 required, documented emergent support when TOLAC is available, and voiced concern about how this language might reduce access to TOLAC in spite of women’s right to choose it.

The CABC became increasingly convinced that they should re-evaluate their policy in light of new evidence and the restrictive effects of the older recommendations.

The Right to Go into Labor

Another interesting aspect of the new policy is its use of the term Trial of Labor After Cesarean (TOLAC), rather than the politically loaded term “VBAC.”  This language is important, and Dr. Stapleton noted that this is deliberate.  It reminds us of the undeniable right of women to go into labor.  Mandatory surgery policies require birth to be scheduled in an imperfect dating process, and deny women the use of their own bodies in a normal physiological process. 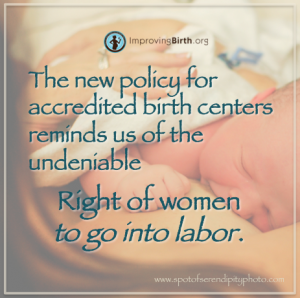 Not necessarily.  The decision whether to offer TOLAC is made by each individual birth center, and the thorniest element of this policy change is the current political climate around the topic of VBAC.

Across the country, providers who support women in this option face fierce political pressure from both their professional organizations and their peers to stop offering this option.  And, to ensure the safety of their clients, an out-of-hospital birth center that elects to offer TOLAC must have the ability to seamlessly transfer in the case of emergency.  The success of these transfers is often dependent upon the collaboration between the birth center and the local hospital providers.  If there is true collaboration, with providers willing to accept out-of-hospital clients when they need hospital services, TOLAC is a viable option for birth centers.

Unfortunately, in many places, no such collaboration exists, and this makes transfer difficult.  It is likely that some birth centers will choose not to offer TOLAC because of situations like this, where political pressure makes the option less safe for women and babies, and where hospitals have mandatory surgery policies.

Realistically, we don’t know how much this policy change will actually impact access to TOLAC and VBAC.  But it is a huge step in the right direction.  It sends the message that patient autonomy takes precedence over liability pressures, and that informed consent is something women can handle.  It allows the “rights and responsibility” of childbirth to rest with families – right where they should be.

* Trial of Labor After Cesarean (TOLAC) is an “attempt” at Vaginal Birth After Cesarean (VBAC).  VBAC is a “successful” TOLAC.  While the terminology is less than ideal, it is clinically appropriate.