From Vaginal Birth Bans in America: The Insanity of Mandatory Surgery, by Cristen Pascucci

“I’m still astonished when I re-read my hospital records and remember my obstetricians telling horror stories to persuade me… or telling me how thankful they were to have chosen Cesarean section for their own birth. All of my obstetricians made notes at each of my visits about having informed me that I could not birth vaginally after a Cesarean there. They even documented my distress at not having a choice in the matter.

“One obstetrician there was very, very honest with me, though. He said that their hands were tied and that they couldn’t recommend the obviously safest option, based on peer-reviewed studies, because lawyers and other hospital policy-writers determined what would be covered by malpractice insurance. If baby or I died or were injured from Cesarean, they were completely covered. If we died or were injured during a vaginal birth after two Cesareans, they were completely on their own. So the safest medical option for me was NOT the safest financial/business option for them. Therefore, the ‘First Do No Harm’ principle no longer applies when it puts doctors at an even slightly greater financial risk.”

Over one million Cesareans are performed each year in the United States (U.S.) – an all-time national high rate of one in three births, and about one in five first-time mothers[1] has her baby by Cesarean.* What many of these first-time mothers don’t realize is that this first surgery has long-lasting health consequences and that they will most likely give birth to any future babies by Cesarean.

In fact, ninety percent of women[2] in the U.S. who have a Cesarean give birth to all future children by Cesarean surgery —with each additional surgery increasing risks of poorer health outcomes not only for the mother, but also for her future children. This situation persists despite the fact that the safety of vaginal birth after Cesarean (VBAC) has been acknowledged by many major health organizations, including the American College of Obstetricians and Gynecologists (ACOG) and the National Institutes of Health (NIH).

No, it is not. In fact, the majority of these women would go on to have a vaginal birth in future pregnancies—if they were given the chance. However, once a woman has had a Cesarean, she will have difficulty finding a care provider and hospital to support her in a vaginal birth. In fact, vaginal birth after Cesarean is not allowed[3] in over 40% of American hospitals.  That’s right: these hospitals and providers tell women they may not give birth vaginally there. 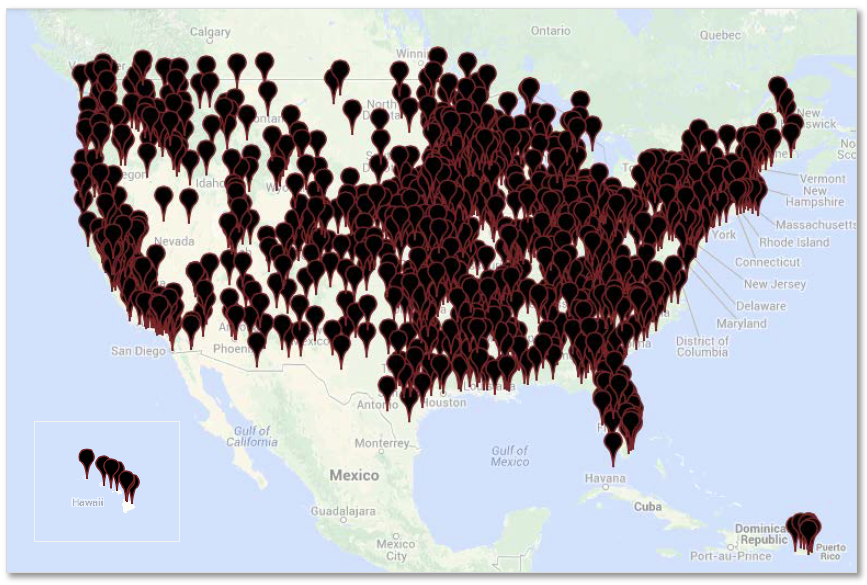 My name is Cristen Pascucci (vice president of ImprovingBirth.org and founder of BirthMonopoly.com), and I have been listening to women’s stories about their encounters with vaginal birth bans for almost two years. As a consumer advocate in frequent contact with women from around the country about issues related to their maternity care, I have witnessed with dismay the widespread effects of these policies on women and their families.  The voices of these women are inserted throughout this discussion.

Let’s take a look at why VBAC bans are so harmful and so wrong.

Chapter 2: VBAC Bans Are Not Evidence-Based

Major health organizations like the National Institutes of Health[4] and the American College of Obstetricians and Gynecologists[5] (ACOG) use words like “safe,” “reasonable,” and “appropriate” to describe vaginal birth after Cesarean (VBAC) for most women.  The American Academy of Family Physicians states[6] that every eligible woman should be offered a VBAC.  Of women who do attempt a VBAC, three out of four[7] will give birth vaginally, while the other one out of four will have a repeat surgery.

Despite these facts, the prevailing public opinion is that VBAC is excessively dangerous.

Actually, it is inaccurate to claim that either mode of delivery is inherently dangerous or safe.  Both vaginal birth with a scarred uterus and Cesarean surgery on a scarred uterus carry their own sets of risks and benefits.

Let’s put things into perspective. Consider the mortality rates for moms and babies. The definitive 2010 Vaginal Birth After Cesarean: New Insights[8] report published by the National Institutes of Health (NIH) found that while maternal mortality is still very rare in either VBAC or repeat Cesarean, “maternal mortality was significantly increased” for elective repeat Cesareans at 13.4 per 100,000 births vs. 3.8 per 100,000 births.

That is, with a repeat Cesarean, the risk of death to the mom is more than three times greater than with a VBAC.

Women do suffer complications and their babies do have problems [in pregnancy]. Fortunately these are rare – but they occur irrespective of mode of delivery. The very rare experience of maternal death is higher for C-section regardless of whether it is primary or repeat.

For babies, an important study published in the Journal of the American Medicine Association[10] found that although the risk of the baby dying is slightly higher in the first VBAC compared to a planned repeat Cesarean, the risk of a baby dying in a VBAC is “not significantly greater” than during a first time mom’s labor.  (Uterine rupture – an oft-cited and frequently misunderstood risk in VBAC – occurs in a VBAC labor 0.4% – 1% of the time,[11] and of that percentage, 6% results[12] in the death of the baby.)

In other words, VBAC is about as safe for that baby as it is for the baby of a first-time mom.

Meanwhile, the risk of fetal death due to amniocentesis (a diagnostic test during pregnancy), characterized as “small”[13] by ACOG and the AAFP, is more than five times higher than the risk to baby in VBAC. (More here: “Comparing Fetal Death and Injury: VBAC vs. Amniocentesis/CVS.”)[14] 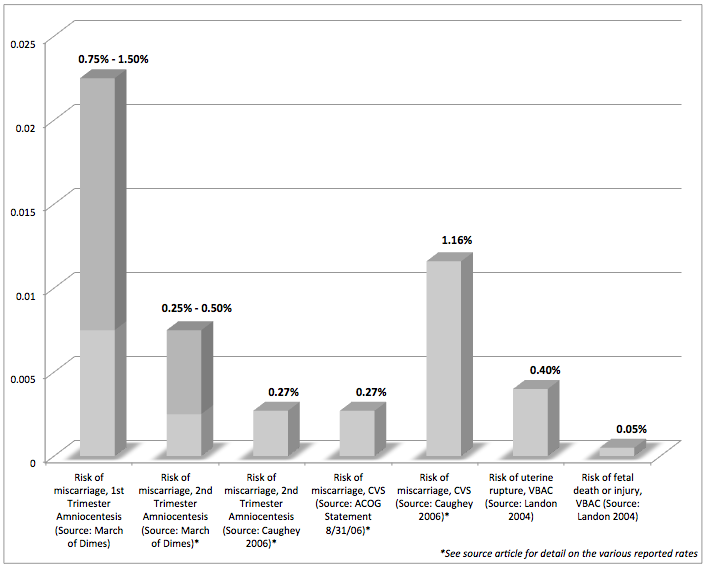 None of these numbers is a true side-by-side comparison of risks, but they are meant to give the reader perspective on the level of risk we are talking about.  If the level of risk for vaginal birth after Cesarean is unacceptable, should we ban vaginal birth for first-time moms and amniocentesis, as well?  Following this logic, shouldn’t every first-time mom have a Cesarean, every time?

The risks of multiple repeat surgeries

Again, vaginal and surgical birth each carries its own set of risks and benefits.  But policies like VBAC bans imply that giving birth vaginally is inherently and significantly more dangerous than the “easier” option of a repeat Cesarean.  At ImprovingBirth.org, we hear all the time from women that they were told of the “life-threatening” risks to them and their babies of attempting vaginal birth, but were never told of the ever-increasing long-term risks of more surgeries.

“After six vaginal births and one emergency c-section, my Ob told me I could VBAC. He backed out on me at 38 weeks. I was too much of a liability. I had a second and third c-section and was never told about placenta accreta or anything . . . . I’m now pregnant and have placenta accreta.” – Dawn, Florida

(Placenta accreta carries as much as a 7% maternal mortality rate and 70% hysterectomy rate.)

In fact, this is what’s really scary in the discussion: serious harms from multiple repeat Cesareans.  The 2010 NIH New Insights[17] report goes on to say, “This report adds stronger evidence that VBAC is a reasonable and safe choice for the majority of women with prior Cesarean. Moreover, there is emerging evidence of serious harms relating to multiple Cesareans.” (Emphasis added.)  In addition to the increased risks of surgery itself (infection, re-hospitalization, etc.), each uterine surgery increases the likelihood of placental abnormalities[18] in future pregnancies – posing a threat to both the mother and her babies.

Perhaps the most serious is placenta accreta,[19] a serious, life-threatening condition, for which the risk, by the fourth Cesarean, is a jaw-dropping 2.13%,[20] or one in 50.  Placenta accreta carries as much as a 7% maternal mortality rate and a 70% hysterectomy rate.  Stanford Medicine recently reported[21] that this condition affected one pregnancy in 30,000 in our grandparents’ generation.  Today, it affects one in 500.  (Read this March 2014 essay by a high-risk pregnancy doctor, “When a placenta tries to kill a mother.”)[22]

“What option does this leave women like me, planning on large families, if we can’t have informed consent to give birth the way we want to at our own local hospitals? . . . [F]or my fifth baby we had to travel three hours one way to a Phoenix hospital to wait out the last two weeks of my pregnancy.” – Brynley, Arizona

Neither should this information be used in an attempt to scare women away from repeat Cesarean.  The evidence shows that the choice between a VBAC and a repeat Cesarean is a very preference-sensitive one. This means that there are potential harms and benefits to both ways of giving birth, and every woman should be allowed to decide which set of potential harms and benefits she is willing to accept, based on full, unbiased information.

But with VBAC bans, the hospital applies its own sweeping risk-benefit analysis to the bodies of individual mothers and babies.  VBAC bans – mandating surgery for an entire group of women who may or may not need it – are quite the opposite of individualized, evidence-based care.[23]

From Vaginal Birth Bans in America: The Insanity of Mandatory Surgery, an eBook by Cristen Pascucci. Read the rest here. 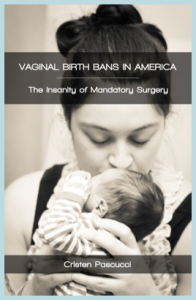 This excerpt above is from the eBook that explores how VBAC bans (or mandatory surgery policies) endanger the health, humanity, and rights of hundreds of thousands of women; how they’ve turned vaginal birth into a privilege and childbirth into a black market in some places – and why we’ve got to do something now.

Author Cristen Pascucci is the former Vice President of ImprovingBirth and is the founder of Birth Monopoly, co-creator of the Exposing the Silence Project, and executive producer of Mother May I?, a documentary film on birth trauma and obstetric violence. She has been running an informational, support, and legal advocacy hotline for pregnant women with lawyers from Human Rights in Childbirth since 2012.

* This percentage is based on 2012 data from 38 states, the District of Columbia, and New York City – where the “revised” U.S. Standard Certificate of Live Birth has been implemented.  The full report is here.

** The Listening to Mothers Survey III surveyed 2,400 mothers giving birth from July 2011 through June 2012.  The survey was produced by Childbirth Connection, conducted by Harris Interactive®, and funded by the W.K. Kellogg Foundation.  The full report is here.