We’ve all heard about women who were told they needed to consider an artificial induction of labor or even Cesarean surgery, because their babies “looked big” toward the end of pregnancy. Many of these women were unpleasantly surprised when their babies were born at completely average weights, after they’d undergone a drastic intervention in a healthy pregnancy.

The latest article from our brilliant Rebecca Dekker on her site EvidenceBasedBirth.com is “What is the evidence for induction or C-section for a big baby?”  She confirms some sad news: 1 in 3 women in the U.S. are being told that their babies are too big, even though weight can’t be reliably predicted. Women are NOT being told that procedures such as artificial induction and Cesarean surgery for big babies have not been shown to improve outcomes, and, in fact, may be harmful. Induction for big baby likely increases the C-section rate.

Her article addresses the four “big” assumptions on which this approach is based:

In maternity care, treating assumption like fact can have devastating consequences.  In this case, we see that the “suspicion” of a big baby is more harmful than an actual big baby!

When it comes to big babies, there is a clear disconnect here between what research says is best and what is commonly practiced all over the country. Please read Rebecca’s article and share far and wide.

Why Is It Important?

Suspected big baby (or macrosomia) is not a medical indication for induction or Cesarean, yet it is one of the most common reasons given for these procedures.  In 2014, the American College of Obstetricians and Gynecologists issued guidelines to care providers recommending that they limit interventions for suspected baby to “avoid potential birth trauma.”

However, we know that it can take many years for guidelines like these and current research to be implemented into routine care.

What You Need to Know

Research shows that common interventions used for suspected big babies, such as induction and cesarean surgery, are actually more harmful and carry more risks than big babies themselves.

★ Non-diabetic, low-risk women are NOT at higher risk of complications due to baby’s size. In some cases, such as with mothers who have pelvic deformities or uncontrolled gestational diabetes, a large baby can be a medical indication for intervention. 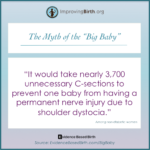 ★ MYTH: It is possible to predict which babies will be big.
FACT: Ultrasound estimates of babies size are unreliable, especially at the end of pregnancy. Predictions of a big baby are right 50% of the time and wrong 50% of the time.

Read What is the Evidence for Induction or C-Section for a Big Baby? from Evidence Based Birth

What Do I Do With This Information?

You have the legal right to full information about anything that’s being suggested, and the right to say “no” or to choose an alternative.  Read more here about your rights to informed consent and refusal.

Hospital policies are “rules” for providers to follow, but do not overrule your legal rights to make choices about your care. Hospitals and care providers do not have have the legal right to impose them upon you.

You also have choices in your care.  If you don’t feel comfortable with your care provider, it is never too late to switch to someone else.  Remember, you hire your care provider—not the other way around.  Be an empowered consumer in your maternity care.  Your baby’s birth is one of the most important days of your lives.
DISCLAIMER: Remember, this is for informational purposes only and should never be construed as medical or legal advice. We encourage you to do your research and talk with a trusted care provider about your unique circumstances and your options.