The consumer voice is often unheard when it comes to large systems. The maternity care system and its history of listening to women is no exception.

ImprovingBirth recently shared a snapshot that a local Atlanta-based midwife posted of a “patient information and birth preferences plan” form, which had been given to a patient from her obstetrician’s office before the patient chose to transfer to a homebirth midwife at 30 weeks pregnant. The response to this post was swift, thoughtful, and sometimes harsh.

“I’d run away from that hospital. They’re making it sound like you have a choice, but actually don’t.” 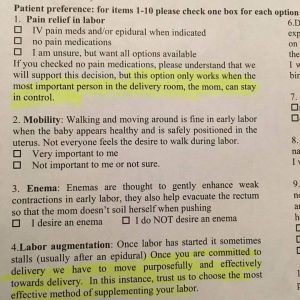 “I have zero constructive criticisms that will not sound angry. So I’ll just sum it up as. ‘Rewrite this as if you were speaking to a capable human with autonomy whom you actually respect.'”

“If mom isn’t in control in the delivery room, something is very, very wrong. She can choose to abdicate that control, but it’s hers to give. It’s no one else’s to take. If they do, they are doing harm.”

“….Please understand that we will support this decision by holding space and giving encouragement if she feels discouraged or out of control, because we know these are common and normal reactions.”

“….If labor stalls we can go over evidence-based options to augment labor if necessary. You have the ultimate choice to decide without fear mongering or feeling rushed.”

My initial reaction was to respond in anger and frustration. But if there is one thing I have learned doing this work, folks on the other end go on the defensive, not listening, and change becomes nearly impossible. Instead, I decided to reach out to providers and hospital administrators in my circle of influence, people I know who ‘get it.’ I asked them to weigh in and help me write a letter that would be heard, one that was direct and impactful.

Although this form came from the Ob/Gyn of Atlanta practice, we decided it was important to notify Northside Hospital’s CEO about this clear coercive and directive practice that is disempowering women, with the hopes that it will address this issue department wide. We’ve requested that they review the form with their administrative team and risk management department. We make these requests with the hope that it opens the door to a conversation about how patients are treated by all staff members within their hospital.

Below is the letter sent to Northside Hospital. We believe this is an opportunity to learn, grow, and create change at the community level by making the consumer voice heard.

Go now and add your feedback to the Facebook post, as we have invited them to review it.

My name is Dawn Thompson. I’m the President of ImprovingBirth, the largest consumer advocacy organization for maternity care in the United States. I’m writing to you in response to a viral social media post that specifically links your hospital to birth practices that are considered harmful and demeaning to women and not conducive to optimal birth outcomes.

The U.S. has the highest maternal mortality rates in the western world, and one of the factors that we have identified is related to the patient’s role in decision-making. We know it is important that women have autonomy during their birth and can truly make decisions based on sound evidence and trust with their care team.

Coercive and directive practice, as outlined in this document, disempowers women and negates their voice. ACOG, the governing body for obstetricians in our country, strongly recommends that their members refrain from this type of practice at all cost. Not only is the practice harmful to women, it frequently has detrimental effects on hospitals and physicians. I have attached the committee opinion for your reference.

As a hospital administrator, I believe you strive to run an organization where patients are treated with the utmost respect. The document that has circulated has had the opposite effect. Your hospital was implicated as being complicit in behavior that is highly alarming and considered unethical and detrimental to obstetric outcomes.

I strongly encourage you to review the letter with your administrative team and your risk management department. I think you will find that they agree with me, that this document goes against your hospital’s bylaws, and that it violates the Patient Bill of Rights. I hope this leads to a review of your current policies, opens the door to a conversation about how patients are treated by all staff members, and also a discussion of how you want your hospital to be perceived in the community.

Any woman who seeks care in your hospital should feel safe and cared for in an environment where she is supported in her birth preferences. She should be able to birth with or without pain medication, freely move, make noise if she prefers, and refuse interventions without repercussions.

Thank you for taking the time to read this letter. If you would like to read comments and feedback from consumers on one of the viral posts, please feel welcome to visit the post found on our social media page.

In love and service,